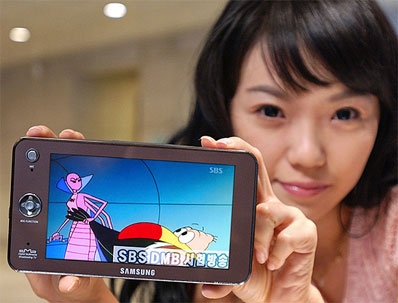 I spend a good portion of my time being jealous of the incredible technology that Koreans get to enjoy that never makes it over here. A new survey that reveals that DMB TV isn’t making people very happy, therefore, gives me a bit of perverse pleasure. Satellite DMB service has been available in South Korea for one year, and terrestrial DMB followed four months later. The survey showed that both forms of the service lacked enough new content to turn users into frequent and habitual viewers.

Half of the respondents to the survey said that they use their phone less than half an hour a day. On a scale of 1 to 5, with 5 being the highest level of satisfaction, users of satellite DMB gave the service 3.40, while terrestrial users rated it a 3.13. Both ratings were below expectations.

In order to increase the effectiveness of the service, users suggested better prices and more content. Non-users said that more affordable devices and cheaper services would entice them.