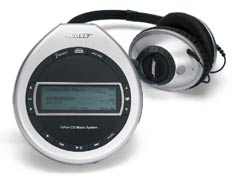 It’s one thing if you already have a portable CD player and are not willing to give it up, or don’t want to set it aside and switch to an MP3 player. It’s another thing altogether if you head out and drop some well earned coin on a new discman, even if it’s from an audiophile’s wet dream like Bose. Well, that didn’t stop the company from releasing the TriPort MP3 CD “Music System.”

The portable CD player will do the usual audio CD thing, including support for the CD-R and CD-RW variety, but also will play back MP3 files burned onto blank discs as well. The large LCD display can let you know what song is playing, tell you how much battery is left, and other useful stuff like that. It is nice that you can be browsing your directories without interrupting playback.

Personally, for the $219 asking price for the Bose TriPort CD music system, I would think you’d be much better off buying a compact 1GB or 2GB flash-based MP3 player and calling it a day. That said, you’ll probably get better sound quality of this thing. Available for order now through Bose’s official website.