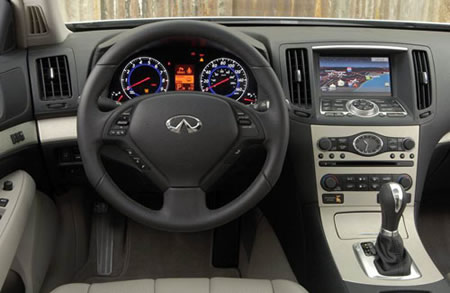 It started with FM transmitters, but quickly progressed to hardwire kits that would allow you to link up your iPod to your car, and jam away to gigabytes worth of tunes. While other car manufacturers like BMW are opting for increased iPod integration, Infiniti is taking a different route for its forthcoming 2007 G35 performance sedan: they’re throwing in a 9.5 GB hard drive from Seagate.

The hard drive manufacturer does make 20, 30, and 40GB versions of its 5400rpm EE25 (that’s the hard drive speed, not the tachometer for the car, sheesh), but there is no word whether Infiniti will be offering the increased storage capacity to its customers at this point. Other highlights from this vehicle are a 300hp engine, paddle shifters, push-button ignition, and touch-screen navigation.

Look for the 2007 Infiniti G35 with the Bose Sound System (including a Digital Audio Converter that allows you to rip CDs onto the aforementioned hard drive) to start popping up in showrooms this November.