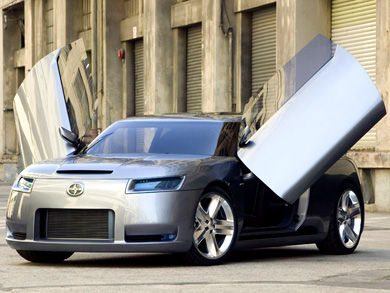 Remember last week when we caught a teaser pic of the Scion Fuse Concept? Well, they officially unveiled the hot two-door sports car at the New York Auto Show over the weekend, including the release of a few of the deets we should be expecting. Of course, there will likely be several changes to both the interior and exterior before this sees production, but it does breathe of the edgy personality that defines the Scion brand.

Most notable, of course, are the butterfly doors and the long slung roof. Designed by Alex Shen and Bob Mochizuki of Calty, the exterior of the Fuse has a definite aggressive look to it, with the low ride height, panoramic window, and what appears to be HID or LED headlights. They drew inspiration from the JGTC racing series of Japan. For the interior, Alan Schneider and Ichirou Mukai, also of Calty, went with a cutting-edge, futuristic look complete with “a media station that runs the length of the dash” and “dual display 10.5-inch monitors.”

Among the other highlights are built-in Wi-Fi connectivity and instant messaging capabilities, seating for four, a detachable drink cooler, and “Mythos” fabric.