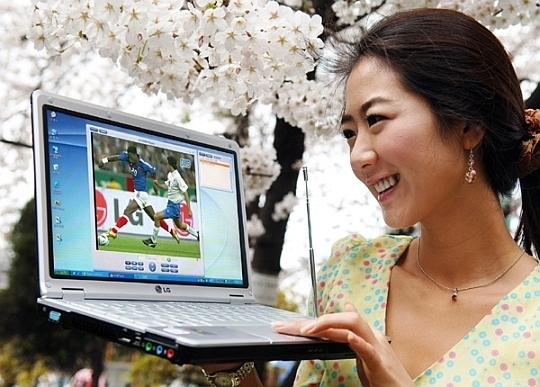 I’ve said it once and I’ll say it again. When it comes to releasing anything with a color screen in Korea, you can’t really go wrong by throwing in some mobile television capabilities into the mix. They’ve already integrated DMB into so many cell phones, but you can’t enjoy that soccer match on such a tiny screen, right? That’s why you might want to look into the LW25 compact notebook from LG.

It’s not as big and clunky as those 17-inch or bigger laptops on the market, because the LW25 has a clear, vibrant 12.1-inch LCD instead, which is more than adequate for some good television watching on the go. LG has kept the weight down to 1.89 kg, while still finding room to slot a dual-layer DVD burner (of unspecified speed). There’s also an Intel Core Duo processor, and what we think is 512 MB of RAM.

No word on pricing or availability, but chances are this yet another Korea-only release.