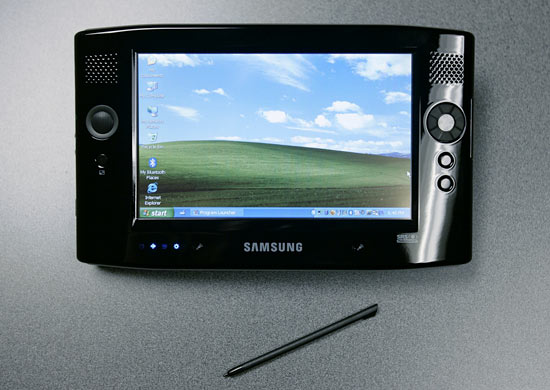 We caught our first glimpse of the Samsung Q1 Ultra Mobile PC back in March at the CeBIT trade show in Hanover, Germany. Since then, news has been pouring in fast and furious regarding the Origami Project device. Other manufacturers are making UMPCs as well, but the Samsung device is garnering the most media attention (for whatever reason). Today is no different.

Word is that Samsung is planning a May 1 launch for its Q1 UMPC in the American market, to be kicked off by an event in San Francisco. While we originally hoped that the tablet PC-esque gadget based on the Microsoft Origami concept would be priced in the $500 range, but if recent reports are any indication, it may be some time before you can get your hands on the Samsung UMPC for that price. In Korea, the Q1 will be retailing for $2000 with bundled accessories.

Look for an official announcement from Samsung regarding an American price point in the coming days.