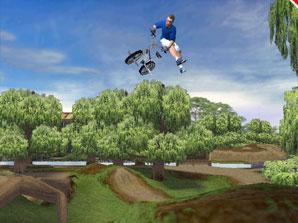 If you like catching the extreme sports programming on ESPN, then of course you’ll immediately recognize names like Tony Hawk and Kelly Slater. BMX freaks have designated Dave Mirra as the best at what he does, and now you’ll be able to take the bike-trick champ with you on the road with the PlayStation Portable.

Dave Mirra BMX Challenge will, of course, feature Dave Mirra, the 2005 ESPN “Action Sports Athlete of the Year”. In fact, he has more accumulated more Gold medals than any other X Games participant… that’s of all time.

You’ll be able to ride your bike through 17 “totally extreme levels with nine totally extreme environments” in BMX Challenge for the PSP. If the computer isn’t offering enough of a challenge for you – or you’re starting to suffer from the solo playing geek syndrome – you can always hook up with fellow X Gamers and play wirelessly with up to three other people via ad hoc play.