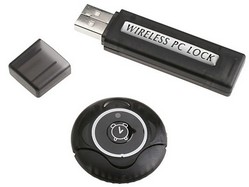 We have seen several different USB PC locks over the last few months, and each one has its own set of special features. None of them so far have done exactly what this relatively inexpensive Wireless PC Lock does.

A timer is another feature in the system, you can set it to limit computer use. As soon as the preset time limit has expired, the PC locks up. Parents could limit their kid’s usage with that trick.

The lock comes with an extended cable to make it easier to use on any computer. Selling price is $29, availability is now.