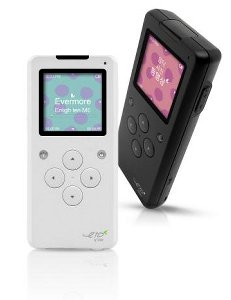 The E10 is the highly anticipated mini-HDD based music player from iRiver, and we’ve finally received word on some firmer specifications and a launch date. The form factor and button layout is immediately reminiscent of the Apple iPod nano, but unlike that glossy white (or black) DAP, this glossy white (or black) DAP features a six gigabyte mini hard drive, though they’re not saying how big – physically – this HDD is. In this way, it is quite a bit thicker than the nano.

Other highlights include a full color 1.5-inch TFT display, FM radio reception, voice recorder, image viewer with slideshow, and even movie watching, it seems. If you’re getting a little bored just listening to tunes or watching videos, you can get interactive because the E10 also comes with Flash game support. Something that might set this unit apart from the millions of other portable music players on the market is its built-in infrared capabilities, allowing you to use it as a television remote.

With a reported 32 hours of life on a single charge, iRiver might have a winner in the E10. Look for it to drop in Korean markets on April 28, priced around $240. They have yet to announce an American launch, but when that happens, prices may dip below the $200 mark.