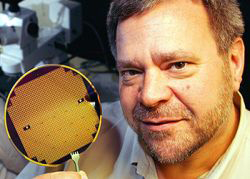 So you go to the emergency room, and with one wave of a device, the specialists there tell you that you have a disease you didn’t know you had. How do they know? They smelled your breath.

OK, it’s not quite that simple, but it’s close. A company named Nanomix out of Emeryville, California, is touting a product called the E-Nose, which can simulate the human olfactory system in discovering disease-causing molecules in a person’s breath. Using sensors embedded in carbon nanotubes, the E-Nose analyzes the molecular residue left by a person’s breath, scanning for simple or complex bacteria.

Conceivably, the E-Nose can be configured to be scanned for any number of disease-causing bacteria. Analysts expect the first use to be scanning for carbon dioxide. Research continues to be done at the University of California, Berkeley.

The product, aside from being found in a health care facility, could be used at airports in the event of viral outbreaks. Something like this could have put a dead stop on the SARS outbreak of 2003.

The E-Nose, pictured above being held by Nanomix CEO David Macdonald, has more than 2,000 chips on it.