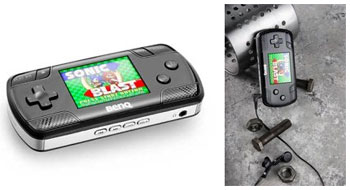 BenQ is putting up the good fight when it comes to portable music players, tossing in some new technology that will hopefully give it a leg up on at least a few competitors. With six more Joybees unveiled at a press conference on Tuesday, BenQ has included Bluetooth connectivity on the E520 and ET50 which are designed to be mated with music phones (of course, they expect you to pick up BenQ-Siemens branded handsets to go along with these). The ET50 also includes a data transmission profile for file swapping.

The E105 is pretty nifty with its clip-on design, and the N370 comes with a full color display. There is also the shuffle-esque P610, except this offering actually comes with a display and full music controls.

Most notable out of the bunch, however, is the EG10. With a Game Boy Micro-like design, this ain’t your grandmother’s MP3 player. Instead, it’s more like a PMP player because it will do movies and such, but more importantly, lets you waste your hours away playing old Sega titles. After all, it comes preloaded with no fewer than 10 games, including Sonic Blast and Columns, as well as the ability to load up more via SD expansion.