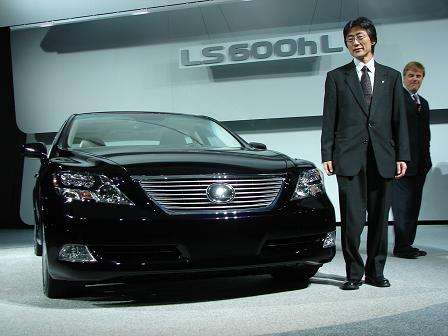 Lexus will be building their line in the future around a flagship hybrid vehicle. They used the bright lights of the New York Auto Show as the forum to show off the new 2008 LS600 hL. This is not the Prius-style hybrid that you are used to. It has a five-liter direct injection V8 engine which combines with a two-stage ‘electronic continuously variable transmission’ to produce up to 430 horsepower. That amount of power is equivalent to what is normally seen from a six liter V12. AWD makes sure that power makes it to the road.

The fuel consumption figures haven’t yet been announced, but they are rumored to in the same range as a mid-sized AWD V6 sedan. That means you get a V8 with V12 power for V6 gas bills. A pretty good deal. Combine that with the fact that the car will be certified as a Super Ultra Low Emissions Vehicle, meaning emission levels 70% below competitors, and environmentalists with a need for power and luxury can rejoice. No word yet on price or availability, but it definitely won’t be cheap. My guess is that six figures to the left of the decimal are likely.