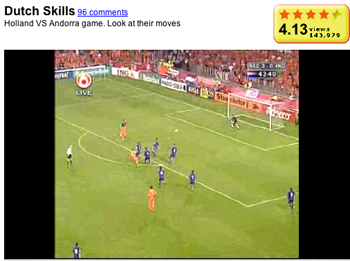 If you listen to Arik Czerniak, mobile video is the future of mobile phones and other handhelds.

Czerniak is the CEO of Metacafe, a website content aggregator that delivers short, entertaining videos that you can download to your mobile phone and take wherever you want to go. Czerniak calls these “media snacks,” bits of pure entertainment that can be enjoyed in the snippets of time that are all many people have time for these days. “Because people have short breaks, they seek short forms of entertainment,” Czerniak said. “Our product fits that bill.”

Like Google Video and YouTube, Metacafe offers users the opportunity to upload their own videos. What sets Metacafe apart, Czerniak says, is the site’s filtering protocols, which, among other things, help avoid duplicate or illegal videos.

If numbers are any indication, the social network is growing very large indeed. The company claims 15 million unique visitors a month, with total video watching exceeding 100 million a month.

According to Czerniak, the top video submitter so far is a woman from Canada who works in a hospital laundry facility. This woman has uploaded nearly 1,000 videos.

Metacafe depends on users like this for its content. Nearly 1,000 videos are submitted every week, but only a few hundred are made available for the general viewing public. The “screening” is done by the Metacafe Control Group, which is a rather large group of volunteers who screen the videos for generally objectionable material. Once a video makes it through the Control Group, it appears on the site, where it is ranked according to priorities that remain company secrets.

Czerniak foresees user-generated content as the future of Internet video. “I have a message for the traditional Big Media providers,” he said. “You’d better be prepared. Big budgets won’t make a difference if you’re not providing what the users want to see.”