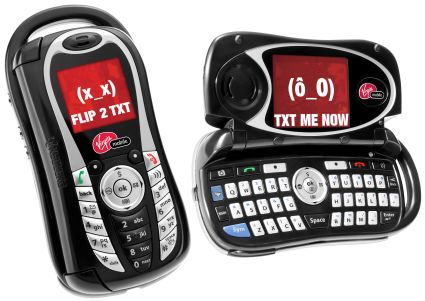 There’s no doubting that this latest addition to the Virgin Mobile lineup is targeted squarely at teens and their obsession with text messaging. The Switch_Back (yes, that underscore is part of its official name) handset is made by the good people over at Kyocera, and functions as a candybar phone for when you actually want to talk to a human voice, but if you’re all about sideways smileys and l33t speak, you can open it up like a horizontally-oriented clamshell to reveal a second screen and a full QWERTY keyboard.

Both displays are colour (65k), of course, and you’ll be able to snap a blurry pic or two thanks to the integrated VGA camera with “five-step digital zoom”. The 32MB of on-board memory won’t floor any techie, but it’s sufficient for what this phone can do. Other features include “superphonic” ringtones, WAP 2.0, and a loop antenna. Lemonade Tycoon and Sexy Poker are the included games.

The price is fair though, as the Kyocera Switch_Back is available through a number of stores throughout the nation for a mere $150.