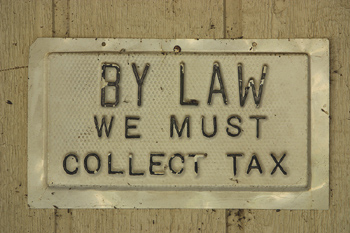 Watch out: Here comes the tax man— and woman, and army.

State governments are tired of seeing consumers get by without paying taxes for online purchases, and they’re finally going to do something about it.

It’s not that you don’t have to pay taxes when buying things online. You’re really supposed to. It’s just that many online retailers haven’t been charging those taxes. And it’s also that states haven’t been looking to collect those taxes, until now.

State governments are now more than ever making an effort to collect on sales tax assessed on online purchases. And why shouldn’t they, the US debt, thanks to that great idea of a war on terrorism, is growing at 2.4 billion per day.

If you live in New York, you know that on your state tax form this year is a line specifically for online taxes. California is on the warpath, too, and says it is owed some one billion dollars.

It’s not really Amazon that’s the problem; it’s more eBay, which has individuals selling to other individuals, and just about any business that has the capability to take orders online. It’s the latter kind of transaction that is unusually unencumbered by what is termed a “use tax.” And it is those taxes that state governments want to have paid.

Some states don’t charges sales tax. You Delaware and Oregon residents know who you are. But even if you live in a state that doesn’t assess a state tax, you still have to pay a use tax for things that you buy from sellers in other states.

That’s the secret price of shopping online. You don’t notice it, maybe, because the online retailer tacks it on to your purchase price. You don’t care, maybe, because you’re still saving money. But if states have their way, you’re going to have to care—and pay up, or else.