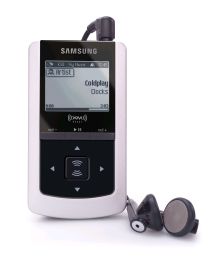 It seems that satellite radio is here to stay, but people still want to have the option of playing tunes from their own library. Samsung is making the plunge into the XM radio market with the launch of the Helix XM2go and Nexus digital player on April 25 at the Time Warner Center.

We saw prototypes of both devices at CES earlier this year and it’s unclear how many, if any, changes have been made to the digital audio players since that date. From what we can tell, the Nexus Portable XM Satellite Radio combines portable XM with MP3 playback and an integrated FM transmitter. They’re saying this is an industry first, allowing you to take the Nexus into your vehicle and jam to XM and MP3 tunes through your car speakers. If you happen to hear something on the radio that you really like, you can even bookmark it for purchase through Napster.

The Helix XM2go sounds like it has a similar feature set, accessing up to 160 channels of XM Radio’s commercial free music, but there is some on board storage as well for your own audio files. No word of a built-in FM transmitter here, though.