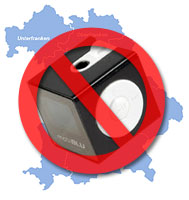 I’m going to try and avoid any references to a certain dictator in the middle of last century who went around wanting to control everything, but word is that the government in Bavaria, the southernmost state in Germany, is set to unleash a law that bans the use of MP3 players in its schools. There is already a rule in place that prohibits the use of cellular phones, and it seems like this mentality is only picking up steam.

It all started when a certain student was found ogling over pornographic material and going “Aw dope!” over some violent pics on his mobile phone, but it just dawned on the government that MP3 players have colour screens too, and they oftentimes have much higher storage capacities than their telephoning counterparts. Of course, the portable storage bit is useful for lugging around class presentations, course notes, and term papers, but that’s a different matter altogether, right?

Come to think of it, there are some pretty advanced calculators out there too that feature colour screens. That sinusoidal wave is looking a little too much like a woman’s bust, so we should ban that too.