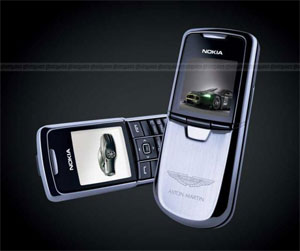 If you fell in love with the Aston Martin when you saw Pierce Brosnan whip around in it in the James Bond films, you aren’t alone. You’re not alone either in being someone who will probably never be able to afford one of those hot vehicles, so what’s the next best thing? Get a blinged out Nokia 8800 mobile phone of course, clad with Aston Martin insignia, wallpapers, and more, then ask for your martini “shaken, not stirred.”

The Nokia 8800 Aston Martin Edition really is no different than the regular 8800 fashionphone, but you do get a handful of extras to go with the package. For instance, the distinctive winged Aston Martin emblem is laser-etched onto the handset’s sleek stainless steel exterior. On the inside, you’ll find some exclusive wallpapers, video clips, and a screen saver to boot. There’s even a “ringtone” of the Vanquish V8 roaring away.

Available in limited quantities, the Nokia 8800 Aston Martin Edition will put you back £800 excluding VAT (more than $1400). Well worth it, right?