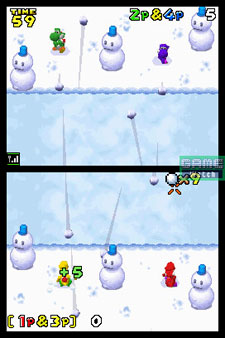 It goes without saying that the biggest franchise that ever came out of the Shigeru Miyamoto camp has something to do with a certain pudgy plumber. Who can forget wasting away many an afternoon playing the old side-scrollers on the NES?

Well, the highly anticipated “New Super Mario Bros.” for the Nintendo DS is set to be released May 15th (North America; June 30th in Europe), and OnNintendo.com managed to get their hands on a dozen juicy screenshots for all to drool over.

Most striking are the mini-games that will be included in this latest offering, many (all?) of which were ported over from Super Mario 64 DS, except this time around, you get to suck your friends into the action because they’re including multiplayer capabilities. Who can resist having a Wi-Fi snowball fight in middle of summer? I know I can’t. Check the link for pictures of a koopaling, a super-sized Mario, and much more.