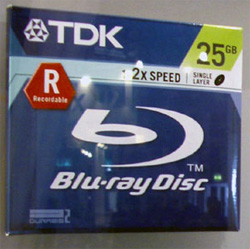 While we wait around for an official word from Sony regarding a launch date for its PlayStation 3 next-generation video game console, we can play around with the hot new media that has everyone talking, but no one actually using. TDK has started shipping blank single-layer Blu-ray discs to retailers, despite the fact that we still haven’t seen any players or burners on the market yet. These overpriced optical discs will be able to take up to 25GB of data, whenever you can get your hands on a gadget that will write on these things.

The burn-once media (BD-R) are priced at $19.99 a piece, with the rewriteables (BD-RE) going for five bucks more. Sounds a little steep, don’t you think? Then again, when CD-Rs first hit the market they were incredibly expensive, as were blank DVD-Rs, so I suppose it will only be a matter of time before the Blu-ray technology gets economically viable for the average Joe.

If you want a double-sided coaster, TDK is getting dual-layer Blu-ray discs ready for later this year. The 50GB media will be priced at $47.99 for a one-writer and $59.99 for a multi-writer. Of course, you could wait until they start offering 50-disc spindles for, well, you get the picture.