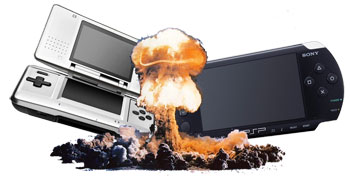 Who is dominating the handheld gaming segment? If you ask Sony they will say that it is definitely them and their PSP. The problem is that Nintendo will say that it is their DS. Depending on how you draw the lines and define the question, both are right. The PSP sells as well, if not slightly better, than the DS in the U.S. and Europe. It has sold faster than either the PlayStation or PS2 did for Sony, and both of those have been huge hits. On the other hand, the DS completely owns the prized Japanese market.

Sony can’t be thrilled with its position. The company isn’t used to being in anything but a dominant position. Not only are they not dominating, the company has taken some hits recently. Their push to make UMD discs, the movie format with a DVD price that only plays on the PSP, a widely accepted standard essentially failed when the major movie studios all backed away from supporting them. They have also faced backlash because their games are largely just PS2 games on a smaller screen, while Nintendo has developed interesting titles specifically for the DS. Whatever happens, you know that neither company will back down without a fight.