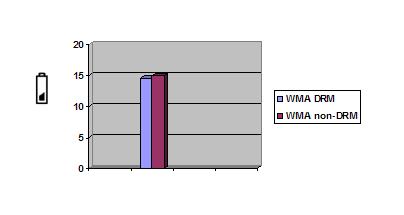 Some time back, we heard about a study performed by the people over at CNET that concluded that DRM’d WMA files result in as much as a 25% loss of battery life compared to unprotected music files. Well, a new test is indicating that the DRM files have a minimal (2.8%) effect, if at all.

The editors at DAPreview performed their study on a SanDisk Sansa e260, and tried their best to make sure the conditions were “fair”, by having both the DRM trial and non-DRM trial performed with volume at 50%, screen brightness low, and backlight on.

What they found was that the DRM-protected files played for 25 minutes less than the 14 hours and 55 minutes the non-DRM files were capable of doing. This is far from being a scientific study, as anyone with a basic statistics background will tell you. The sample size was too small (n=1 just doesn’t cut it, guys), and there were far too other variables that weren’t accounted for, from how old the battery was to which player the tests were performed on.

The jury is still out on whether DRM has a negative impact on playback life, so you might as do your own “scientific tests” in the meantime.