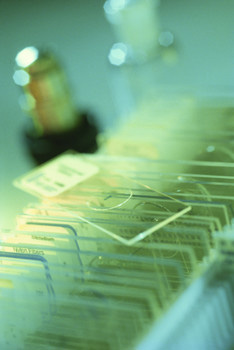 That’s the premise behind some of the latest research to come out of MIT. A report in today’s issue of Science says that an international group of researchers, led by scientists at the Massachusetts Institute of Technology, have created a virus that will attract metal in order to build nanowires. Why? To power microscopic batteries.

The goal is to power very small machines. The smaller the machine, the smaller the power source needed. The scientists hope to eventually build batteries that are as small as a grain of rice.

The M13 viruses were created using bacteria, of course, and are 6 nanometers in diameter and 880 nanometers long. The viruses were modified slightly so they would hook up with metal ions. The viruses, when fully engineered, formed nanowires of cobalt oxide that formed orderly layers. The final result was a set of tiny lithium ion battery electrodes, which can provide power for tiny machines.

This could conceivably also lead to viruses producing larger amounts of nanowires that could then form into larger batteries, which could then power larger machines. Perhaps natural power has a new meaning?