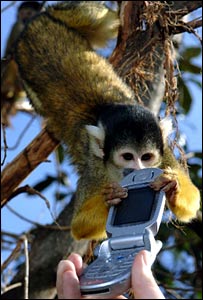 At the London Zoo, they’ve made a new barrier-free enclosure for the spider monkeys, allowing zoo visitors to get in much closer to the happy little primates than ever before. However, they want the monkeys to be able to still partake in their natural habits and behaviours without being distracted. Well, it seems that the animals were drawn in to people who whipped out their cell phones to take pictures or videos, fascinated by the blinking lights and bleeping sounds, no doubt.

Of course, the staff couldn’t lecture them on how recent studies are indicating that cell phones may lead to a greater chance of cancer, tumors, and whatnot, nor could they teach them that it’s not very nice to take what is not yours, so they resorted to good old Pavlovian conditioning. They got their hands on some dummy, unwanted phones and covered them in “an unpleasant sticky substance” – I’d rather not know the exact details about that – and the monkeys quickly learned that cell phones aren’t that desirable.

Then again, the monkeys haven’t dabbled in DMB yet, so time will tell if this problem re-emerges when they catch King Kong on the small screen.