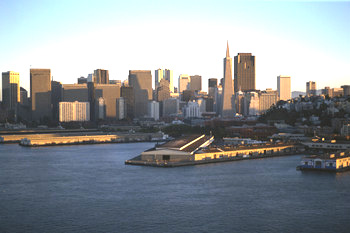 You’ll remember that San Francisco, among other cities, is pursuing a WiFi blanket service. The powers that be in the city, after a six-week review, have chosen a partnership between Google and Earthlink to provide that service.

The price tag is expected to be about $15 million. The result will be a 300kbps service that anyone can use for free. You’ll have to look at the little ads that will pop up from time to time, either as real pop-ups or in other various Web-specific ways. If you want to avoid all of that and get a faster connection, you can pay just US$20 a month and get ad-free 1MBps connectivity. Either way, you’ll be beating dial-up speeds.

San Francisco, you’ll remember, is part of a large metropolitan area, routinely called the San Francisco Bay Area or just the Bay Area. This WiFi blanket service is targeted at covering just the city of San Francisco, leaving the rest of the Bay Area—including the large cities of San Jose and Oakland—out in the cold, so to speak.

Philadelphia is close to having its own citywide Wi-Fi service, although free isn’t in the vocabulary there. Chicago and Minneapolis are also pursuing such citywide endeavors; whether those cities will charge fees for their services remains to be seen.

For now, the buzz is all on San Francisco, mainly because of Google’s involvement. The best guess so far is that the blanket will be ready by the end of the year.