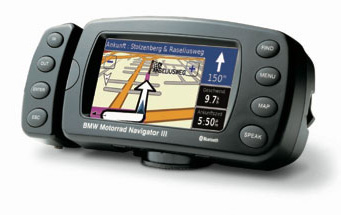 Garmin has already unloaded a truckload of GPS units on us, but by and large, they are designed for use in a car or SUV. What about the people out there who hit the road on two wheels, revving up their motorcycles on the Interstate? They have to find their way around overly complicated overpasses and roundabout roads too, don’t they? Garmin is listening, because they’re on the cusp of releasing the BMW Motorrad Navigator III.

Motorrad is “motorcycle” in German, so the name makes perfect sense. You won’t be leaving this great gadget unattended on your bike as you fuel up and grab a bite to eat, so of course it will be fully detachable and portable. Keeping a good view of the 3D graphics won’t be a problem even in the brightest of conditions, because the 454 x 240 display is anti-reflecting.

You can prepare your routes beforehand on your PC and then load them onto the 512MB of internal memory with the provided software, but for changes on the fly, you’ll be glad to hear that commands can be done completely handsfree because the Motorrad Navigator III comes with text-to-speech and Bluetooth voice control.

No word on pricing, but expect this latest offering from Garmin to hit the streets later this month.