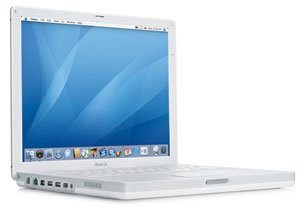 We’ve heard rumblings about a new set of notebooks from Apple that are on the cusp of being released. They will be incredibly compact, priced reasonably, but still have enough processing guts to wet your pants.

Well, it has been confirmed that Asustek Computer of Taiwan will be building about 1.2 million notebooks for Steve Jobs and friends, at least initially, and although they’re being called iBooks, some say that these are the new line of MacBooks instead.

Though they have said that these new units will feature Intel microprocessors, they haven’t indicated whether they are of the solo or duo variety – there’s a good chance that both will be available. As far as screen size, you’ll be getting 13.3-inch LCD panels manufactured by AU Optronics and Chi Mei Optoelectronics of Taiwan, as well as LG Philips of South Korea.

Look for these new Apple notebook computers, whatever they’ll be called, to start shipping in June.