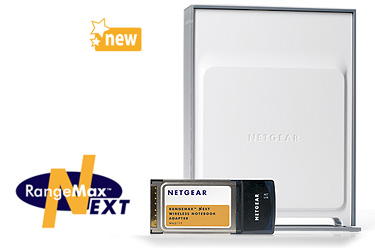 While we’re all waiting around for some official 802.11n goodness to pop up in the marketplace, you don’t have to resort to plain Jane 802.11g stuff. Netgear is releasing a new line of RangeMax NEXT products that adhere to 802.11n “draft” standards. You probably won’t be able to get the full speeds from these new devices when they get mated with official N things, but in the meantime, you’ll be able to enjoy some pretty awesome transfer speeds.

They’re reporting data speeds as high as 300Mbps, and ability to stream HD-quality video. Among the other goodies to be had are MIMO (multi-in, multi-out) capabilities and gigabit Ethernet from the router. The physical aesthetics aren’t the most exciting, but hey, that’s not why you’d be interested in this new RangeMax NEXT line anyways.

As expected, you don’t need to replace everything in your whole wireless network because the new WNR854T router and WN511T card are backwards compatible with “legacy” 802.11b and 802.11g standard products.