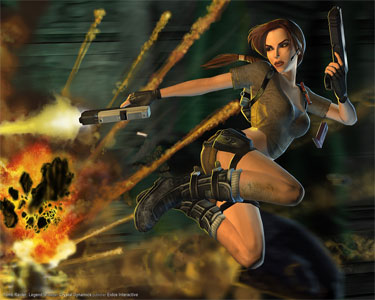 Remember back on the old PlayStation when everyone drooled over a blocky, polygon-filled Lara Croft? Well the popular heroine is set to take over your PC and home gaming consoles again with Tomb Raider: Legend, but the action doesn’t stop there. Take her on the go with a 3D mobile phone version of this latest game.

Of course, you won’t have to deal with the overly complex controls on the Xbox for the phone rendition of Tomb Raider: Legend, but that doesn’t mean that it won’t be a challenge. The gameplay itself will be quite basic, with a new movement system developed specifically for cellular phone use, but it will certainly be fun to play the three-dimensional goodness while waiting your turn at the dentist’s office.

Not all phones will be able to play the Eidos title, however. You’ll need to be able to make use of QUALCOMM’s “BREW” solution to swing with Lara Croft. The game maker is also releasing Pandemonium, a platform adventure game featuring the shape-shifting Nikki. No release dates are available at this time.