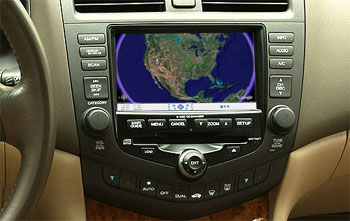 With a good selection of navigation choices out there, it’s hard to pick just which GPS service is right for you. It does seem, however, that when you’re in doubt, you can always turn to Google for help, be it news, email, or a search engine. GPS is no different, I guess, because Honda is set to add Google Earth to its ‘internavi Premium Club’ navigation service.

This service was initially launched way back in 2003, but with the incredibly powerful tool known as Google Earth, Honda sees the opportunity for an upgrade that could guide lost drivers all around the world. Unfortunately, they are only making the Google Earth’d GPS system available in Japan, so while travellers can find a way to get from Tokyo to London, the service won’t last them the trip. Well, that and the issue of driving on water.

Volkswagen is already working on a similar system in partnership with nVidia to create 3D Google maps for their vehicles, so it’ll be a race to the finish line to see who gets a “Powered by Google” navigation system to market first.