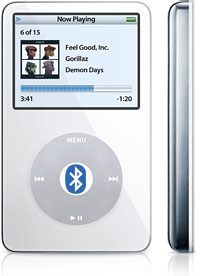 This rumor feels like one of those games of telephone that you used to play as a kid, but it is intriguing enough to talk about. The Register is reporting that Stuff, the British magazine focusing on girls and gadgets, has been told by an unnamed British retailer that a Bluetooth equipped iPod is on the way. The retailer claims that they have been told to get ready for the new product.

On one hand, this makes perfect sense. PortalPlayer, the maker of Apple’s chips, announced in February that they were integrating Bluetooth and Wi-Fi into some chips. Several iPod accessory manufacturers have also been creating Bluetooth add-ons, proving that there is a market. On the other hand, Steve Jobs has been cool to the idea of Bluetooth for the iPod, saying that the last thing consumers want is another battery that they have to keep charged. Bluetooth headphones, of course, have their own power source.