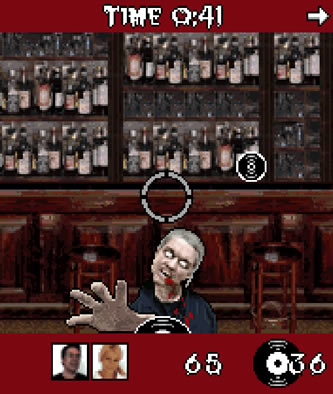 This title might be a little late to the party, but better late than never when it comes to a new cult classic like Shaun of the Dead. The popular horror-comedy is set to hit the smallest screen of all with a mobile game version of the movie. Based on the provided screenshot, it seems to be some variation of a first-person shooter. No complaints here.

You get shoved right into the middle of action inside Winchester Pub. Armed with a variety of, er, weapons like a cricket bat and classic vinyl, you struggle your way through a seemingly endless army of zombies bent on devouring every living, breathing soul in sight.

Mobile games are a huge market, given that nearly everyone has a cell phone these days, and it goes a long way trying to sell the public on a basic title like this when a popular movie or television show (like Family Guy: Air Griffin) is involved. Universal Mobile Entertainment senior VP Jeremy Laws agrees: “We think games are a great way for consumers to enjoy our content on their handsets.”