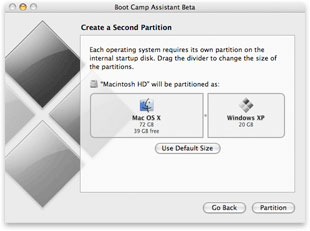 What’s the difference between a Mac and a PC? Not quite as much as it was just a couple of days ago. Since the latest batch of Apple computers showed up with Intel Inside, seemingly everyone has been trying to come up with a way to run Windows on them. Several geeks and hackers have come up with methods. Now Apple is making it easy. They have made available Boot Camp, a public software beta that lets you run Windows XP on your Intel-based Macs.

As long as you have a Windows XP installation disc, Boot Camp can set you up. Once the OS is installed, you can choose between either XP or Mac OS X as your OS of the moment. Boot Camp will be included as part of Leopard, the upcoming version of Mac OS X. For now, you can get Boot Camp as a download from Apple.