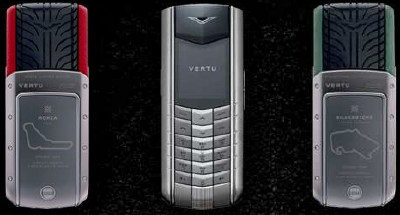 If you’re one of those people that have to be unique, someone that has to have a cell phone that no one else has, then keep reading, because Vertu is set to release some limited edition cell phones that will certainly get a few second glances without being too flashy. The RaceTrack Legends series will feature a number of world’s greatest – you guessed it – race tracks etched into the cover, with rubber (tire-like) accents to boot.

They have announced that there will be six different phones in this series, and they have released the first two, featuring Italy’s Monza and Britain’s Silverstone. Each phone is individually numbered, and limited to 1000 units each.

You’ll be disappointed if you’re expecting a monster feature list, because these phones are far from high-tech, though they’ll probably be able to withstand being run over by a car, just like their predecessors. What you do get is Bluetooth, a very basic UI, and the knowledge that it’s incredibly unlikely anyone else has the same phone as you. Price? Don’t even ask.