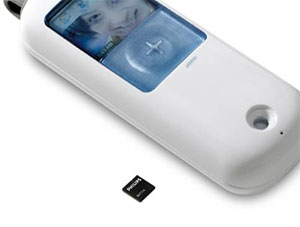 While mobile television broadcasts are making humungous headway in certain areas of Europe and Korea, it has yet to make as big a splash in North America. Currently, to be able to access video on the go, you have to make use of wireless broadband for a one-on-one connection, whereas it would be so much more efficient if it were just “out there.” DVB-H technology is just that, but current modules are quite large, making them difficult to fit into smaller handsets. Philips is hoping to change that.

The company’s new BGT216 chipset is less than half the size of current DVB-H modules (15 x 26mm), measuring at a barely noticeable 7 x 7 mm. This will allow handsets that aren’t so bulky to have mobile television capabilities, and thus, make them more readily available (and more attractive) to the prospective public. “This way, you really enable people to make smaller equipment,” said international product marketing manager for Philips Semiconductors Joost Verhoeks.

Phones with the BGT216 chipset should start popping up in early 2007.