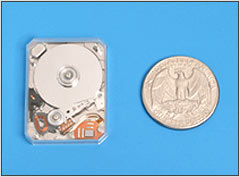 Flash memory is incredibly popular for a number of reasons. The incredibly small size is probably the most commonly cited, and it’s tough for hard drive manufacturers to compete on that front. Where hard drives can claim supremacy is larger storage capacity. Well, it seems that Hitachi senior vice president Bill Healy is envisioning a 1.3 inch hard drive that can give the best of both worlds.

The small 1-inch (up to 8GB) and 0.85-inch microdrives are great for their size, but cannot hold as much as the more standard 1.8-inch HDDs (up to 80GB) found in mini notebooks. These 1.3-inch drives should fit right in between and still take up less space, consume less energy, and be more cost effective. “It gives you more competition with flash and doubles the capacity over 1-inch,” said Healy.

The hard drive market is still growing, despite stiff competition from flash memory manufacturers, having increased 18 percent from 2005 to 2006. Of course, the bulk of these hard drives are found in PCs, rather than portable devices.