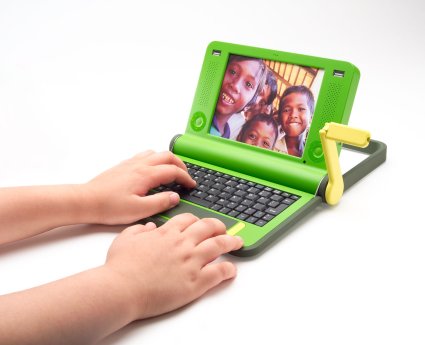 Obviously when it comes to creating a sub-$100 computer, you won’t be rocking the Core Duo or high-end NVidia graphics, but that was never the intention when Negroponte started pushing the One Laptop Per Child (OLPC) project. For developing countries, this project is meant to provide an educational tool for those that normally wouldn’t have access to a computer.

More details have been revealed about the OLPC mini-laptop, and most notably is that they are ditching the hand crank. It is said that the hand crank because it puts too much stress on the box, so more recent mockups have shown an adapter that allows for pedal power. On the more concrete tech spec end of things, look for a 500 MHz AMD processor, 128MB of RAM, and a mere 512MB of flash memory.

The OLPC is still being planned to run on a variant of Windows (CE), because according to Negroponte, Linux in its current incarnation is still too “bloated.” The screen switches between a monochrome 1180 x 830 to a full color 640 x 480, depending on lighting conditions.