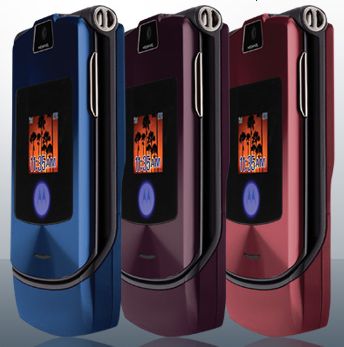 By the widest of margins, Motorola’s V3 RAZR is easily the company’s most successful line of cell phones, so it should really come as no surprise that they’re going to milk the super slim flip phone for all its worth. We’ve already seen variations like the slew of pink and pink-ish phones that have hit the American market, but now the big M is showing off a couple more incarnations at CTIA in Las Vegas.

Most notably is the V3m, because, as you can guess, the “m” in its name stands for music (or music-phone, we’re not sure). The feature set is similar to other mid-range Motorola phones on the market with a 1.3 megapixel camera, stereo Bluetooth connectivity, and a microSD slot for expansion (up to 1GB of tunes). While the SLVR (L7) features iTunes, they haven’t indicated whether or not the V3m will do the same.

The V3i isn’t going anywhere, though, because Motorola has launched a few more colourful variations to that handset. You’ll soon be able to get your hands on a dark blue, maroon, or violet version of the slim flip. Motorola also announced the entry-level W315 clamshell, though no specs of pics accompanied the statement.