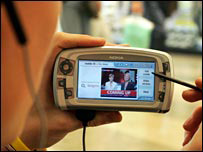 Blackfin has joined the ranks of mobile TV providers, according to parent ADI. Specificallly, they will provide Terrestrial-Digital Multimedia Broadcast (T-DMB) signals to Korean consumers in the near future.

Josh Kablotsky, of Analog Devices Inc., made the announcement at a Microprocessor Summit in San Jose, Calif., also saying that an agreement had been reached with Seoul’s I2t Co. to provide T-DMB images.

T-DMB is designed to beam digital television signals to handheld devices, not only portable TVs but also PDAs and mobile phones. The images are a multiplex combination of ITU-T H.264 for video and MPEG-4 bit slice for audio.