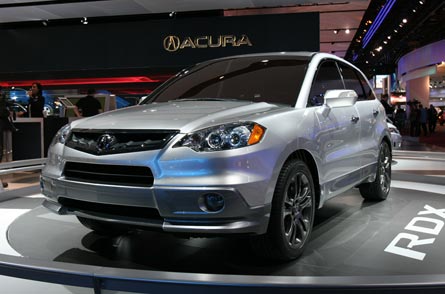 We saw the RD-X concept vehicle from Acura last year, and it sported some rather unique features like LED or neon-like headlights and taillights, and touch-panel doors (instead of handles), but now that they’re prepping the vehicle for production, Honda has made it a little less exciting and little more practical.

The Acura RDX – as a production model to be built in Ohio – is making its debut at the New York Auto Show next week, but the concept vehicle is still be touted around at the Vancouver International Auto Show this week. What we do know is that this Honda’s first turbocharged engine, a 2.3-liter i-VTEC four-banger that, thanks to the turbo, makes 240hp and 260 lbs-ft of torque. As expected for a crossover/SUV of its type, it comes with AWD, the same system found in high-end RL sedan.

The production model seems to have door handles, more standard taillights, and what appear to be high-intensity discharge (HID) headlights. Other than that, the body shape itself is very similar as the original concept. Look for more information on pricing and launch dates (word is that August is the target) in New York.