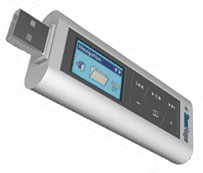 Sharing is good, especially when don’t need a computer to do it. If you’re having lunch with a friend and happen to find out that she has your favourite song on her MP3 player, you can easily send it over to your own music player thanks to Sharing-On-The-Go technology, found in Xmultiple’s FlashPoint devices.

The company released these devices last December, but they forgot to include a critical feature in that first release. Well, they’ve caught themselves and are filling in the gap, because the FlashPoint MP3 player will come equipped with an FM Tuner four weeks from now. The design is uncomplicated, but don’t lose that cap.

Expect the flash-based players to have the same capacities as the existing units, and everything else should remain relatively untouched, perhaps with the exception of price. You’ll soon be able to listen to your favourite radio broadcast (and record them as well), and then share it over coffee with a co-worker.