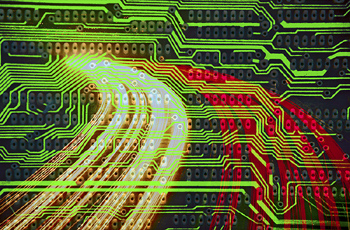 Transparency isn’t something you necessarily want in the world of science, unless you’re making circuits.

Researchers at Oregon State University report that they have created transparent circuits. What it means for the future of computers and electronics is this: That LCD screen is the circuit. In fact, it’s a whole mess of circuits. No more stuffing and stuffing more and more information onto tinier and tinier wafers. Sort of brings new meaning to touch-screen technology.

This is quite possibly the first step in wafer-thin computers.

Want to watch TV at the breakfast table? Take the TV with you, plop it on the table, and munch away. Sound far-fetched? Could happen.

It also could happen that an airplane’s gauges could be on the view window. No more looking down for pilot and copilot.

More down-to-earth examples include cell phones, TVs, copiers, and high-tech toys. All of these items could be powered by transparent circuits, making them more powerful indeed.

As for the group at Oregon State, head researcher John Wager estimates that the circuits will be in wide use in as little as five years.