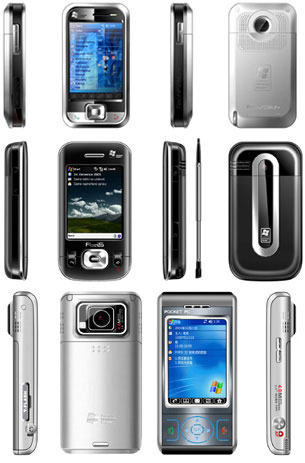 HTC may not be particularly well known to a lot of people, because the vast majority of their product line doesn’t reach the market under the HTC banner. Well, it seems that a new company based out of China is taking on the smartphone giant, and they’re doing it with a huge army of gadgets… and I do mean huge.

Tech Faith Wireless (TFW) is trying to jump all over the ODM market that HTC currently has dominated. All of TFW devices will be running on Windows Mobile, and they take on a fairly good variety of form factors. Among the features you’ll find here include quad-band GSM, HSDPA, touchscreens as big as 2.8-inches, microSD expansion, and integrated 2 megapixel cameras. Most will include 64MB of flash memory, 64MB of RAM, and even GPS navigation. There’s some optional stuff too, like Wi-Fi and MicroDrives.

As with most things “Made in China”, expect TFW’s handhelds to be priced with a budget in mind at a yet to be determined date.