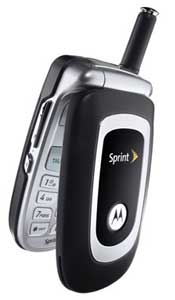 Sure, Korea gets its super-powerful DMB phones and Japan gets handsets with multi-megapixel cameras, but all of those pale in comparison the ultra high-end Motorola C290 clamshell heading to Sprint PCS. Okay, maybe not, but it does support the service provider’s Vision content – the first phone to do so, in fact.

You won’t Bluetooth or a picture-taker on this handset, however. What you do find is Java support for a bunch of your favourite apps and games, a speakerphone for handsfree calling, a full color display, and voice recording for the quick note when you’re without pen and paper. The WAP 2.0 functionality is pretty nice too, but this is far from being an elitist handset – it was never meant to be.

If you’re not caught up in the latest trends and just want a simple phone in a clamshell form factor, the Motorola C290 just might be for you, especially considering that it will likely retail for about $30 after rebates and contract bonuses and whatnot.