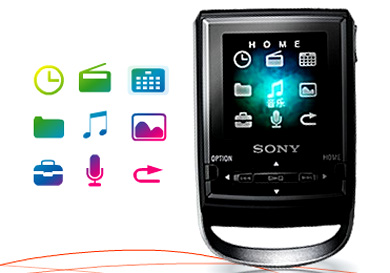 What do you do after you kill the Bean? Well, for Sony China, it means that it’s time to release a sleek new MP3 player complete with a full 260K color OLED display. The new CE-P series sports a 1.5-inch screen that not only contains an extra-purdy looking GUI, but can also cycle through your uploaded bitmaps and jpegs.

The feature set is fairly standard for the market. You’ll find support for MP3s and WMAs, though, there is no mention of OGG, AAC, or other not-so-mainstream formats. There’s a built-in FM tuner, including the ability to record directly off of the radio, as well as an integrated voice recorder.

The pricing is pretty good though. The entry-level 256MB version will run you about $100, and the 512MB will go for $125 – both of these are available in black, red and silver. The series tops out at the $150 1GB model, which comes in either black or bling-bling gold.