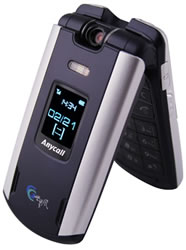 Leave it to Samsung to make a phone that does something new. Well, it’s not entirely new to have a GPS unit talk to you and guide you to your destination, but this is the first – for me, at least – that a cell phone has been equipped with the technology. Other handsets may have GPS, but as far as I know, Samsung’s SCH-W399 is the first with voice-guided directions.

Other features on this tri-band GSM / CDMA 1x clamshell include an integrated 1.3 megapixel shooter that swivels a full 180 degrees, a decent sized 2.2-inch 260k color LCD display (176 x 220), and Bluetooth connectivity. Although the SCH-W399 does have music playback (as well as a loudspeaker), there is only 57MB of on-board memory with no expansion slot in sight. The keypad has a similar “touch pad” text recognition functionality to it as that found on a few Motorola phones.

This 90 gram GPS-enabled cell phone should retail for about $600 USD and available now… in China.