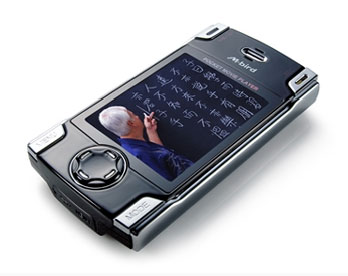 While its appearance might make you want to think that it’s a high-powered smartphone, the M-Bird XZ-22 is just a compact personal media player (PMP), but that’s not necessarily a bad thing. It’ll tackle a wide variety of multimedia formats on its 2.2-inch 260k color LCD display, allowing you to carry around your favourite movies, music (MP3, OGG) and pictures in your pocket.

Unlike most other PMPs on the market, the XZ-22 has been fitted into quite the compact package. Measuring a mere 3.5 inches across (1.9 inches wide, 0.6 inches thick), its size is comparable to the Game Boy Micro. This device is also capable of recording up to 260 hours of audio/video directly. The directional pad navigation is straight forward, but the capacities leave much to be desired for a PMP.

Weighing in at a feather-light 65 grams, the Maycom M-Bird XZ-22 will be available in 512MB, 1GB, and 2GB versions, but we’re still waiting on a price point.