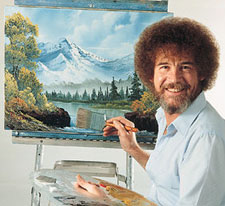 Remember Bob Ross? The guy with the afro on public access television that taught us all about painting wispy clouds and “happy little trees”? It may seem like eons ago, but now his quiet hippie personality is going to be immortalized in a video game. No, this is no April Fool’s joke, it’s for real, and it’s slated for the upcoming Nintendo Revolution, as well as the Nintendo DS and PC.

The PC version will probably be fairly standard fodder, with some variation of keyboard and mouse use (a story-based PhotoShop? That’d be just strange), but the “unique inputs that the Nintendo DS and Nintendo Revolution have… can truly immerse the players while they learn to paint like Bob Ross,” according to Joseph Hatcher of AGFRAG, the game’s developer. They haven’t come up with a title just yet – I’m thinking Bob Ross’ Joy of Painting will do just fine – nor have they found a publisher.

Nintendo did say that the Revolution is being designed in such a way to capture the attention of players who have been turned off the overly complex and frustrating games that have come out these past few years, and the gyroscopic technology found in the Revolution’s controller seems quite fitting for a painting (and cooking, sword swinging, and tennis playing) title, as does the touch screen interface of the DS.