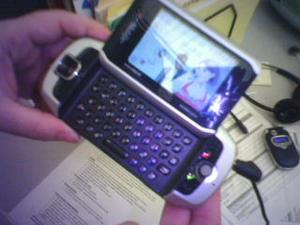 Sidekick junkies will be thrilled to hear that some mysterious pictures of the upcoming Sidekick 3 have emerged. And it doesn’t look like people will be disappointed.

There’s a mouse-like controller to make it easier to get around inside your machine. The keys are more rounded for easier use. On the back, a more powerful flash is nicely integrated with the lens to make the camera look more like a camera.

Also from the back you can see that there is a removable compartment, which opens up all sorts of speculation about what that could be for. The best guess is that it is likely for a removable battery, which would be a nice addition to this model. It could also have to do with the TV features that have been speculated about. The profile shot shows that this thing is at least as bulky as the earlier models and maybe even bulkier. That seems odd. Overall, we still don’t know when it will come out, but it is nice to see some pictures.