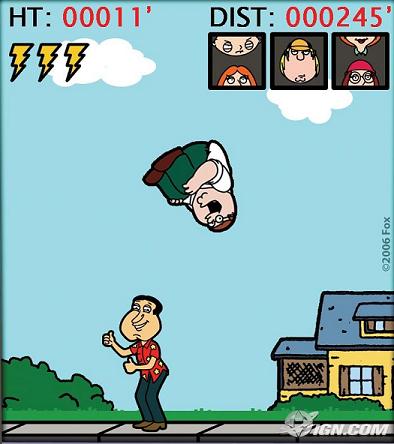 Family Guy: Air Griffin takes the recently revitalized Fox animated series and brings it your cell phone one more time, allowing you to carry around America’s favourite off-beat family in the palm of your hand. The story this time around – which only serves as an excuse for the action – is that Peter has spent Meg’s college fund on a medieval catapult. The genius of a father is set on breaking the record for “longest freeform flight”, and this is where you step in.

Peter sets himself into the catapult, and you hurl him as far as you possibly can. The controls have been kept incredible simple with only one key being used: as you can probably guess, there’s a gauge that goes up and down determining the angle of flight, and then a second determining the power. As Peter twists, spins and flails over Spooner Street, you’ll encounter obstacles, Stewie, Lois, and maybe even that oddball of a neighbour Quagmire. Appropriately, Air Griffin is being published by Airborne Entertainment.

No word on when this “freakin’ sweet” title will be released, but it should be soon.